Penniless actor forced to live in his car now makes Ł250k a year after selling 100,000 homemade films from the boot

It's a rags to riches tale that would grace any Hollywood blockbuster - and it even has a bizarre-looking car.

For 20 years eccentric Dennis Woodruff has been battling to fulfill his dream of breaking into the movie scene.

The penniless actor was forced to live behind the wheel of his motor as he hawked his portfolio round more than 200 agencies, facing rejection after rejection. 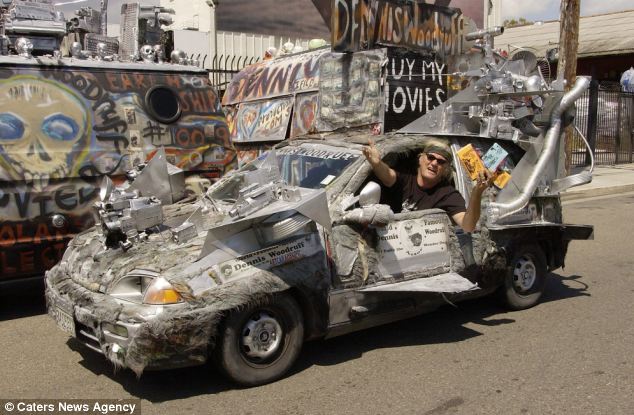 Entrepreneur: Eccentric Dennis Woodruff has become a familiar face on the streets of Los Angeles

He even resorted to making gluing his portfolio pictures and phone number to the outside of the motor to make it a "mobile business card".

But after becoming a familiar face on the streets of Los Angeles he's revealed he has turned his life around by taking on Hollywood head on.

Mr Woodruff took the extraordinary step of writing, directing and starring in thousands of his OWN movies.

And it has worked. He has now sold a staggering 100,000 of the flicks from the boot of his crazy car.

Mr Woodruff now earns more than earns Ł250,000 every year from his movies, which are mostly sold to tourists.

Yet he still chooses to live and work in his caravan just behind the iconic Paramount Studios in Hollywood. 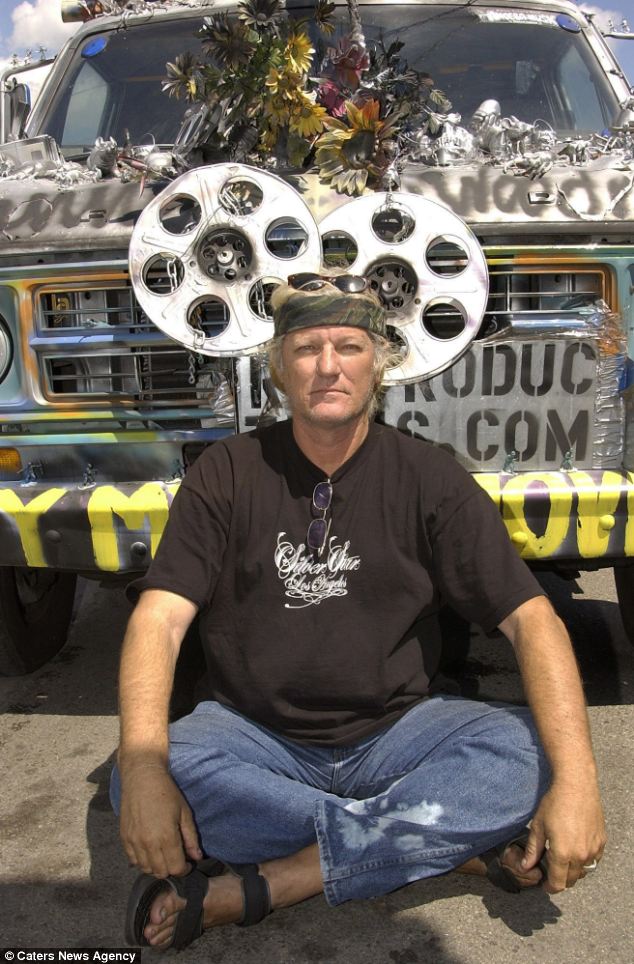 Following his dream: Dennis is the writer, director and star of hundreds of homemade movies 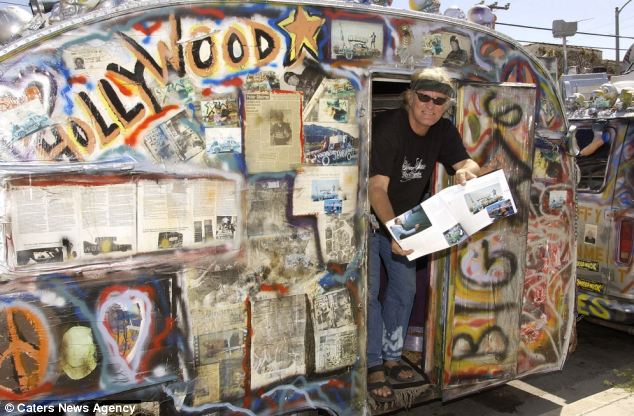 Out of work: But Dennis makes Ł250,000 a year selling his own movies

Dennis said the key to his success was hard work and determination.

He said: 'Hard work pays off if you stick to it. I have been at my career for more than 20 years and the rewards have now started pouring in.

'Prosperity is a good thing because it brings more. I probably have everything I ever wanted in life, even more. In fact, I have too much.

'I count my blessings and I am thankful for all my success.

'I believe individuality is important and I'm proud to say that people around the world respond and buy my work.

'I've already sold more than 100,000 movies at ten dollars each and I've only just started.

'There's an overwhelming demand even the big studios want to see my movies now.'

L.A. Weekly: The Top 10 Most Eccentric, Creative (and Quite Possibly Crazy) Characters

Dennis Woodruff: One of the LA's best known self-promoters (for his customized art cars and flair for streetside hype), Woodruff, according to film-maker Ramzi Abed (whose developing a reality show with art prankster, comic and film-maker) personifies social satire in this city. His latest guise is a spaceman character, but there are more. We met the local legend this past weekend while out and about, and he tweeted us the next day, "Sorry if I was a bit out of it or erratic, but I was in between personas." That's a new one! Woodruffs films were recently picked up for wide distribution by Troma Entertainment. 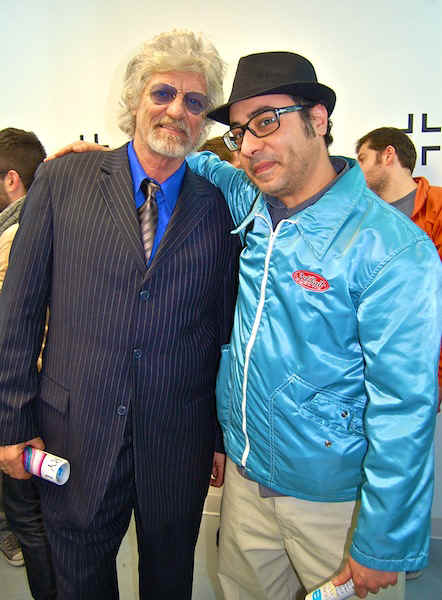 It’s in the blood, says Dennis Woodruff of his V8-fueled showmanship. That Woodruff uses his Crown Victoria to publicize his latest movie production seems a natural offshoot for the self-proclaimed grandson of S.H. Woodruff, cobuilder of the Hollywood sign, who used motor vehicles to advertise his Hollywoodland development. Why? “It evolved out of being a frustrated actor. I don’t want to be like Angelyne and spend $10,000 on a billboard. I thought, ‘Why don’t I use my car to advertise myself?’ When that didn’t work, I started to write, direct, and produce films that I could star in.” Peanut gallery: “I told Quentin Tarantino that I didn’t know if my first movie would be any good. He said, ‘It doesn’t matter. You’ll learn from it and make another one.’?”

The Los Angeles Peanut Gallery: Know Them. Love Them. 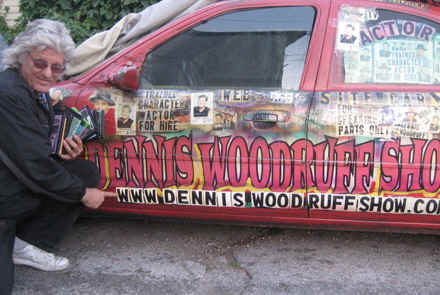 I have to admit, I felt like I had been living under a rock to not know more about Dennis Woodruff. You know, that guy? Drives around town in a crazy van? Makes movies?

His chaotic but surprisingly comprehensive website, www.denniswoodruffshow.com, gave me a first glimpse into the Hollyweirdness of it all. Woodruff claims to be the last indie filmmaker in Hollywood, spending the past 12 years directing, shooting and starring in dozens of films and documentaries. He's taken the Hollywood model and flipped it, ultimately achieving fame for his quest to become famous (but not so much in a Hilton kind of way).

For anyone else, the car (he retired the van) might seem more of a desperate attempt to break into Hollywood proper. It's solidly pimped out with his website, head shots, and "actor for hire" signs, which he laminated and decoupaged onto the vehicle. "I would like to be taken seriously by Hollywood," he admits. "In a big way."

But if you haven't seen him driving around town in a while, it's because he's put a cover on the car for the time being.

"It was my calling card," he says. "But if a car takes the spotlight away from you, it becomes a prop." 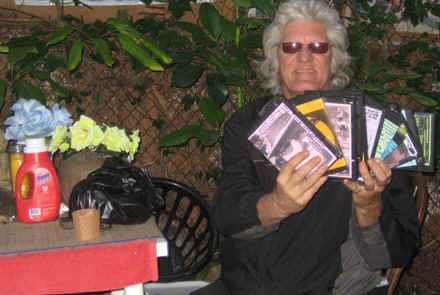 Maybe he's approached you at a coffee shop-holding a stack of films and reciting his marketing spiel to get you to buy at least one, preferably three for the price of two.

"I get a lot of rejection," he concedes. But still, Woodruff has managed to make a living entirely off his films-a feat that thousands of hungry young actor/director types would kill to accomplish.

The thing is, Woodruff is convincing as hell, if a little intense. A 53-minute documentary about graffiti artists in L.A.? Sold. A glimpse into surfer life? Groovy. When pitching "Tales from the Laundromat," Woodruff astutely points out that a Laundromat is a "true American icon" that has never received the kudos it deserves.

Genius or madman? Anyone who can support themselves on entirely self-produced art gets snaps from me. After spending a couple of years living in his van ("I wanted to see if I could do it"), he got himself into a small West Hollywood bungalow where he lives with his dog Tuffy. And recently, one of his biggest goals came to fruition-a distributor, known for its gonzo, indie and sometimes gross-out films, has picked up 13 of his movies.

"Somebody really had to make a statement in Hollywood about being an individual," he explains. "If you love what you do and work hard at it, people will find out about you." 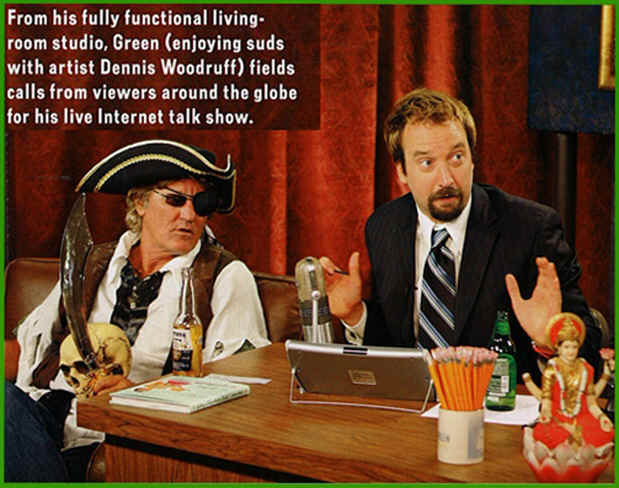